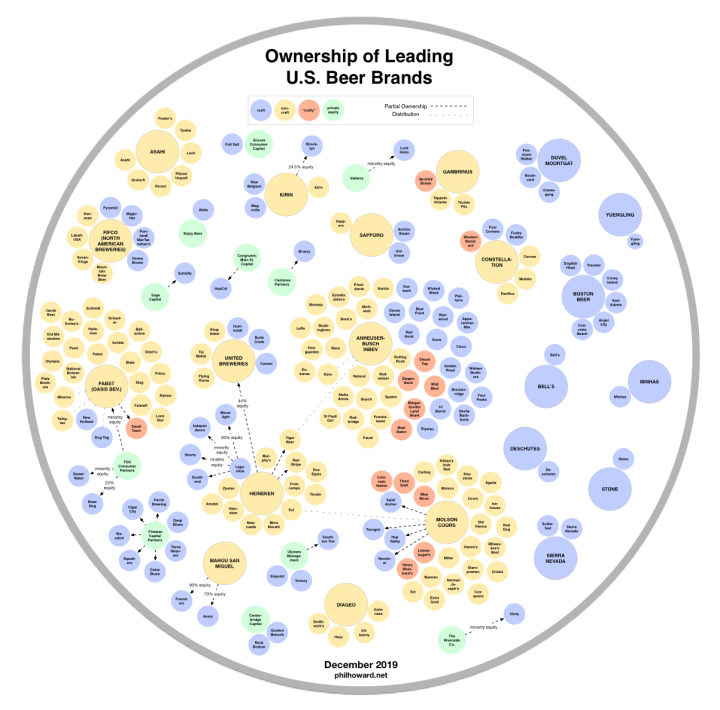 This graphic shows the current ownership relations among U.S. beer brands as of December 2019. Since the previous version of this graphic (October 2017), a number of changes have occurred, including:

Larger-scale craft brewers have struggled to increase sales in recent years. New Belgium’s response was to sell the firm to Asahi (headquartered in Japan), while Dogfish Head’s response was to merge with publicly traded Boston Beer. In addition, Constellation sold Ballast Point, for which it previously paid $1 Billion, to the much smaller Kings & Convicts Brewing (Highwood, Illinois). Constellation plans to retain recent acquisitions Four Corners (Texas) and Funky Buddha (Florida), both of which have experienced sales growth, in contrast to Ballast Point’s declining sales.

Anheuser-Busch InBev paused its acquisitions of craft brewers for several years after criticism of the buyout of Wicked Weed in 2017. In 2019, however, ABInBev acquired Platform Beer Company (Cleveland, Ohio), and purchased the remaining two-thirds stake in Craft Brew Alliance (which had itself acquired three additional breweries the previous year).

These trends make it difficult for consumers to know who they are supporting with their purchases–for more detail see “Craftwashing in the U.S. Beer Industry.” One interesting response is the Independent Craft seal, developed in 2017 by the Brewers Association for the United States. This seal can be placed on packaging as long as the brewery produces less than 6 million barrels of beer annually (currently less than 3% of U.S. sales) and is less than 25% owned by a non-craft brewer. It has since been adopted by more than 4,000 breweries. In Australia the Independent Brewers Association has developed a similar Certified Independent seal.